This little guy is as small as your little fingernail!

From the good people at “Wildlife of Sydney”

This little frog is usually a green colour but it can change colour to be brown or a mix of the two colours. This colouration gives it excellent camouflage in the vegetation of swamps or dams where it hunts. It is active both day and night, spending much of its time in the vegetation, occasionally lunging out to take mosquitoes and other flying insects.

Like many tree frogs, you are more likely to hear them than see them. Visit any wetland around Sydney, particularly from October to April, and you will probably hear the ‘reek…pip, reek…pip…pip’ sound of the male Eastern Dwarf Tree Frog calling for a mate.

END_OF_DOCUMENT_TOKEN_TO_BE_REPLACED

Well I think the heading pretty well spells it out, here I am everything travelling ok and one day i get an error from within my Counterstrike Source stating error after 4 tries – hmm strange, now everthing else is working, browsing the web, mail, even finding CSS servers and Steam connection, it all worked fine. The only thing was trying to connect to a server..whack thanks for coming..no CSS for you :).

A little research pulled up a similiar problem from the Gamearena forums with a clue regarding the recent Telstra change of the MTU value – note there was very little info and related cases…. Now wtf is a mtu and why is telstra messing with it.

Referring to the wonderful Wikipedia, MTU stands for Maximum Transmission Unit. Maximum Transmission Unit (MTU) refers to the size (in bytes) of the largest packet that a given layer of a communications protocol can pass onwards. MTU parameters usually appear in association with a communications interface (NIC, serial port, etc.). The MTU may be fixed by standards (as is the case with Ethernet) or decided at connect time (as is usually the case with point-to-point serial links). A higher MTU brings higher bandwidth efficiency. However, large packets can block up a slow interface for some time, increasing the lag for further packets.

END_OF_DOCUMENT_TOKEN_TO_BE_REPLACED

Well, a little history here – moved house from where I had an existing cable internet connection to a new house where it already had provisions for cable internet (the people before musta had it), so bright ‘ol me thinks, just plug him in and see what happens – fairly typical process for me, very little thought and worry about the consequences later :)

So I plug it in and fire up the my debian gateway and voilia (or however you spell that french word) instant internet connection…..hmmm wonder if I should tell telstra. Well changed the billing address for our account to ensure i got the new bills! Nonetheless, a few weeks later decided I would call them and get the address changed etc, I suspected they may whack me with an $86 reconnection fee but hey…note I have been a cable customer for over 5 years! so theres no contract or stuff. Anyways..called up telstra and they were helpful and offered me a new modem and no reconnection fee provided I sign a new contract blah blah…However it would be best to get the phone transferred over before doing the cable, ‘no problem’ I say, they even offered to call me back after they connected the phone (which for the record they did not!)

Now to the phone…got the wheels in motion and they said it would be connected on day X and just make sure a phone was plugged in…no problem. Done but no working phone…just one very dead line…hmmm no problem I say, lets get the tech dude to check the line to the house. Tech dude comes out checks the outside line, leaves a note saying fixed fault in line and now please check all outlets and if you have any problems good luck and its now your problem. Maybe not in those exact words but basically thats what they say :)

So being the electrical guru that I am :) and seeing that little ‘ol terminal block on the front door (inside) I thought…lets have a poke….pulled off the cover and found a birds nest of wiring…hmmm phones only need two wires to work, blue and white, yep they seem to be there….however there is two separate lines coming into the house! One that is connected is a newer looking one and other, an older looking cable with all wires not connected…

So again, lets just try and plug something in and see what happens..Pulled out some alligator clips and hooked up the unconnected blue and white wires to my phone (Yes I did check which ones go where! – see here)….after a little static and re-arranging of the clips….shazzam…we have a dial tone…. It would appear that the wrong line into the house was connected or corrected during the service….

I, like a dutiful clean electrical guru :) ( by now u must know the truth) tidied up the wires and whacked the cover back on…. 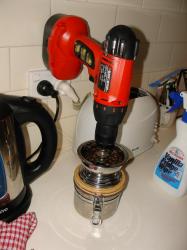 I could be onto something here…..why yes of course I would love the ‘jolly’ La Pavoni coffee bean grinder but when the financial crunch hits what better way than to improvise :)

Now, the hand grinder was generously supplied by the petti-coat government, however by the time the coffee beans were ground ones elbow was also ground and clicking….so rather than spend $200 on a good burr grinder – note any self respecting coffee maker must use a burr grinder, refer to here for the difference between burr and blade grinders – I decided to do a quick mod to allow the hook up of the cordless drill. Now these wheel burr grinders can be noisy and messy so the poor neighbours now suffer the morning pain of me grinding away :) But it is substantially faster than the hand options….

Definitely do not want to accidentally fall in one of these nests, i remember bites from a single one hurts like buggery and the lump lasts for days! Imagine a nest of ’em….

Galstons Walk – part of the Great Northern Walk – check it out here! a tinyfraction of the 250 km walk!

Bull ants have a fearsome reputation, and deservedly so. They are large with long, straight, powerful jaws and a potent venom-loaded sting. They attack intruders of any size that come too close to their nest. Bull ants also have well-developed vision and will follow or even chase an intruder a good distance from the nest. Usually the sight of large aggressive ants streaming out of the nest is enough to prompt a hasty retreat. If not, the ants deliver painful stings by gripping the intruder with their mandibles (jaws), curling their abdomen to reveal the sting and injecting the victim with venom. Often multiple stings are delivered.