Well, its Norway's version anyway.. you either get a forest of trees or none at all in that country :) hence for my lonely tree starved soul I found this, way across the lake a lone tree dead amoungst the living. Don't read any weird sh$t about me through that statement, it just sounded good in my head ;) The seaweed was what caught my attention, that stuff is so thick you could just about walk on it, although, imagine falling into that and trying to get out, i hate brushing up against seaweed when I am snorkelling or swimming (think of those cat videos and cucumbers ;) )

#Valsøytunet try and pronounce that one!

The first day in Norway was one the most vivid, i sometimes wonder why people rave so much about Australia when there are places like Norway. Whilst I love this sunburnt country of ours (any it'll probably give me skin cancer 'cause of it ;) ) I found a real connection with the still lakes, towering hills and the simple housing, plus the sun did not burn, even in the middle of summer :)

Its funny, months later, I can still grab a point on google maps and find my way to any one of the many beautiful spots we visited, like this one, just on the edge of Vinjeøra, not the most spectacular fjord, just a run of the mill one, but still beautiful.

Completely unrelated to the image, but someone forgot to let the sun know it had to rise this morning, oh wait, it knew I was coming out for sunrise ;)

This is for the peeps on the northern half of the planet… where, apparently, its a bit cold at the moment.. I gotta say, it was a beautiful day when we flew into Trondheim, shorts and tee-shirt weather and a town with a whole lot of history and buildings on the water without a straight line between them ;)

A slightly different take on a place where the pool is just about always the main subject – well truth be told I was just trying to avoid all the darn spray ;)

Swell was a little hectic this morning and the wind equally so. I only had to clone out about 14 million spray dots as a result of it :) There was a neat patch of grass up here on the rocks nestled in with a little pool of water. 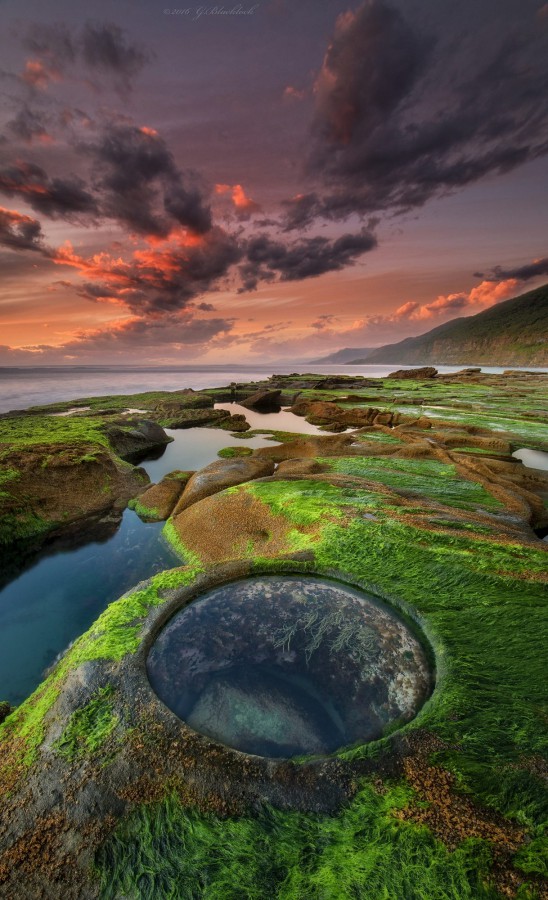 All this talk about compositing images and dropping skies in has done only two things for me :)

I guess its for some – but the wholesale dropping in of the sky – as I have done here, opens a new door to image creation but also another level of complexity of trying to create and capture images..

Anyway, for complete disclosure, which it what seems to be the key outcome of most discussions, this image is made from two completely separate images from completely different locations.

The processing was as simple as 4 layers in PS, a graduated mask and a duplicate mask to cleanup a few spots on the hill.

well tickles, it is a few years older than you ;)

I am surprised that these outflow pipes still exist here, given that Manly is one the top tourist spots of Sydney I would have thought they would have moved or found another solution for them… oh well, it gives the local photographers something I guess

The many breakwalls placed in Botany bay to try and prevent sand shift and loss create a strange view but also do create neat photo ops and also handy fishing outcrops for those so interested in catching fish :)

At low tide you can see all the cool little sea creatures that have also turned up to make the basalt boulder wall their home, unfortunately its also slippery as a freshly greased bearing so one must take care not to slip over.

This image is a kind of panorama, i took one image for the foreground at an exposure to get the detail in the rocks and another exposure captured for the sky in particular to maintain the highlights on the clouds. I was too lazy to bother bracketing each one :) and the post processing was as simple as stitching the two together and some manual blending to get the exposure correct between the images.

Ya gotta love kids.. well most of the time anyways.. as tickles refused to go to sleep and insisted on watching me look at photos said, ‘you like taking photos’? i said ‘yup’ to which she replied ‘they are really nice dad’. :) might have had something to do with the fact that I previously said I would let her sleep with her jelly-straw (Japanese semi frozen sweet), she did not want to eat it.. just go to sleep with it :) whateva works for ya I reckon, just go to sleep :)

Damn I wished I lived in the future, I can’t wait for them to find out whats out there….

If you had asked me a few years back whether using a panoramic setup was worth the effort, the answer would have been pretty well no. However I have come to realise there are a few niche areas of photography which can only be done with a pano kit.I use that term, ‘can only be done’ pretty loosely, probably a more accurate way to put it is, ‘using a pano kit can really improve the ease, speed and post processing of panoramic images’. Its pretty amazing what post processing you can now do to wrangle and stitch images into a panoramic format and correct distortion, but the use of pano kit can in quite a few cases pay for it self in time savings alone. Not to mention those cases where no amount of magic stitching software will work, architecture for example or even landscape scenes with a mix of close and far objects and lots of straight lines, a panoramic image of a jetty comes to mind.

END_OF_DOCUMENT_TOKEN_TO_BE_REPLACED

Its a pretty wild place. Driving back from a sunrise session the other day I passed the local 7-eleven just up the road from where I live and noticed a news crew setup out the front. I did not think much of it at the time but found out later that someone took to two people there with an axe, crazy stuff. I reckon they might need to change the sign back to 'The Wild West' from the 'Inner West'. I still remember the old days in Newtown and surrounds, certainly not the latte sipping culture it is now :)

Its pretty shit that you turn up to a 7-eleven to grab some late night goodies and get attacked by some nutter, hopefully the two that were attacked do make a recovery and return to some resemblance of a normal life again..

Anyways, here's a whole bunch of images stitched together into a panorama of Sydney Harbour, quite nice after the sun (well what there was of it) had gone down and lights of the city cut through the scene. No axe wielding peeps out there on this night, just the couples armed with cold pizza and wine for a romantic evening on the harbour…or thats what it seemed :)