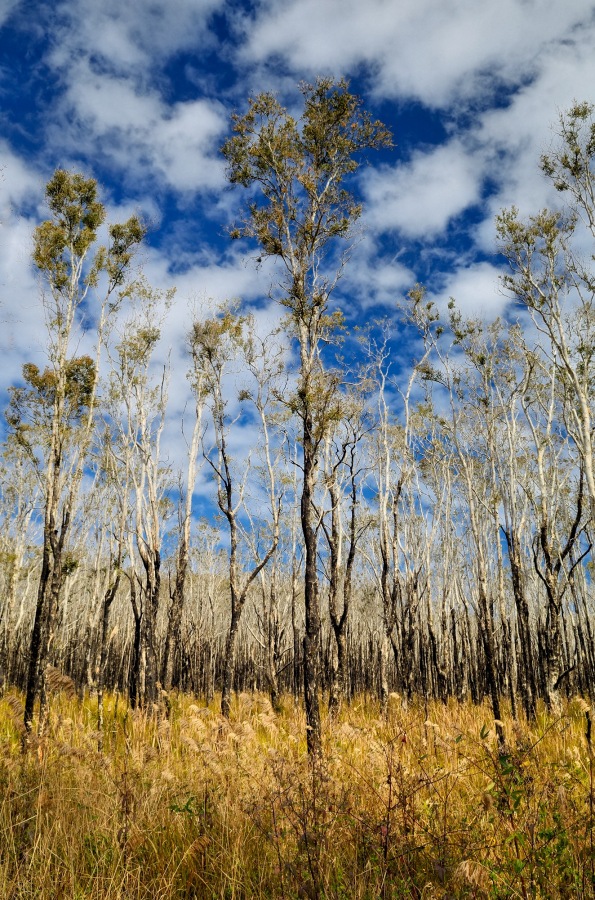 One of Many, Paperbark Forest – (c) Gerard Blacklock

There’s a story with this image, one which only came to light many weeks after it was taken, I was down at the local large chain supermarket doing the weekly shop at a very ungodly hour which is, btw, the best time to do it since hardly anyone is there and you only wait 2 minutes for a checkout. Anyway, so I started chatting to the bloke operating the checkout, mentioning that it must be getting close to knock off time and he said
“shit yeah, can’t wait, i really hate this job”
I must admit I was a bit taken aback, so I said
“sure, buts better than doing nothing I suppose”
he then mentioned that this was true, but had spent 4 years studying at uni only to come out when the GFC hit and subsequently in a bad time in terms of trying to get a job in his chosen field.
It got me thinking a bit (which is rare 🙂 ) about how the older generation and how many times I had heard how
the rain was colder, the stones sharper blah blah blah… when in fact I would actually put it out there that the young folk of today and quite possibly the generation to come are gonna have it pretty tough, much more so, than say my parents, or myself (i still consider myself young 🙂 ) have had it.
When I went to uni there was also no guarantee of a job at the end, however it was in fact the first year uni fees went to the new scheme of different degrees costing different amounts (and surely enough all degrees increased), if I had gone to uni the year before I started, It would have cost half as much as it did when I got there 🙁
At the least though, there was still some positive aspects to getting a job in your chosen field, this was diminshing though with the ever increasing student numbers – particularly in my stream of engineering which graduated 40 odd students, of which the industry only needed about 20 (across all unis!)

anyway…so I feel for this guy, still very young, educated and yet having to work in a job that he does not like – fingers crossed buddy that your luck changes and you get that opportunity to work in the field you were educated for!
I know for sure that I am very grateful I got/have the chance to work in my field of choice – doing cool stuff with planes 🙂 and I hope my children get the same opportunity, however I suspect, their road may well be a bit harder, the rocks a bit sharper and the rain a bit colder..

Single image
Techie data:
D7000 with Nikkor 17-55mm f2.8 @ 17mm – Aperture: f/8 and Shutter Speed: 1/90s seconds
out front – HoyaFilters CPL and lots of dry paperbark trees like all those graduates from uni every year! (and you thought I could not relate the image to the post 😉 )

9 thoughts on “One of many”