I used to really enjoy going to this park, but now it is now overrun with people walking their dogs, well, basically thr majority just letting their dog roam free. I can put up with the occasional dog checking me out and sniffing the kids and dodging the occasional dog poo, but when you spend half your time dodging dogs, picking up the kids and trying to stop dogs scaring the kids it gets a bit tiresome.

To cap it off and this is probably the real kicker, the blatant disregard that dog owners have for clearly marked signs just makes me irate. A big part of Sydney park is the wetlands which has had extensive landscaping and design and is now home to a bunch of birds, even some crazy migrating birds, then you see the banks of the waterways decimated by dogs and dogs in the water and you just shake you head. “No dogs in wetland”.. what part of that is not clear?

the only way to stop this is by putting fences around it which means access is lost for everyone.

Note: there are some who do seem to do the right thing, but it really seems to be the minority.

Rant over – some BW images for something different

END_OF_DOCUMENT_TOKEN_TO_BE_REPLACED

So its summer in Europe at the moment apparently, however I think our friends on that side of the equator kinda need to have a think about what that really means, we spent our last day in Edinburgh where the summer temperature was.. 13 degrees, we flew back to sydney to the heart of our winter and it was 16 degrees… :)

Anyways onot those beaches, yes in Oz we have some awesome beaches and we take it for granted, however we did find a place (thanks +John G Moore ) on the west coast called Morar which had sand which was an excellent excuse for a beach :) truth be told it was quite nice and we (particularly the kids) were pleasantly surprised.
Anyways, i went for a stroll after chaos and tickles were asleep and checked out the surrounding area for a seascape or two, not finding much ringing my bell, i headed up into the hills to see what was there, not much either, but I did find some sheep, lots of wet boggy pastures and some other crazy nuts out trying to get a photo, hence this shot :)

Its a 6 shot pano, which had some nice colour in it, however I could not quite get it to represent what I saw on the day, and it seems the BW brings out the nice texture of the clouds anyway..

This scene reminds me of many stories told about spatial disorientation, basically a condition, usually when flying, where one loses sense of which way is up or down, typically results (for the inexperienced at least) in a graveyard spin, no guesses for what that means :(

In this case, whilst the the removal of colour adds to the effect, in reality it was a struggle to distinguish a horizon, couple this with the blurring of the ridges from sand being whipped up by the wind and I reckon it would not take much to end up walking on ya head :)

Luckily I was not doing much walking at that point :)

Which leads me to a question for all you light room gurus.. LR is awesome for correcting this stuff, however I would like to apply the defringe (under lens corrections) to only selective parts of the image, to prevent it doing weird stuff to places where purple is meant to be ;) ideally i want to be able just to selectively apply it to the left side of some buildings for example..
I know you can use a control point, however it only gives you a option for defringe, not the full control ie purple/cyan control…

I pulled another swifty on this one.. I had taken a test shot at super high iso just to check the composition, the B+W filter is screw in so getting the compo right is a bit harder than when using the slide in filter types. In the final exposure of 309 seconds, the two boats in the foreground where a bit on the blurry side from the movement, hence I just layered a small part from the test shot onto the final image, even at high iso it was ok and really only accounted for a tiny part of the frame. That said even at the high iso the noise control is pretty darn good anyways…a little selective noise reduction and its pretty hard to tell ;)

I always wanted to use that title :) and I think this building is the perfect subject for it.

One significant difference between the D7000 and the nikon D750 cameras which becomes quite apparent in shots like this is the noise and sensor hotspots. Previously when doing exposures like this on the D7000 there would be a barrel load of hot pixels and more noise (for lack of a better term). The D750, in this case has none, yep.. thats right.. zero hotspots and the resulting long exposure is much cleaner (read less noise) – this is to be expected given different sizes of sensors and the pixel density i suppose.

anyway enough of all that boring stuff, back to the picture, this image is taken with the B+W ND1000 filter, which was the second ND filter I purchased, the first was a 3 stop hoya one, just for waterfalls), the B+W was my first introduction into super long exposures and even after the first use I was really pleased with the results, the only drawback, and it is a significant one is that its a screw filter, meaning it can be quite time consuming to get a single shot, ie one must firstly compose, focus, then screw the filter on and then take shot (after putting your DK-15 eyepiece cover on – dont forget that :( )
After sometime of using this filter I did get the Lee bigstopper which is a slide in filter, hence is by far more convenient, however a completely different colour cast and in my opinion less nice than the B+W – that is however based on nothing but my grand opinion. And in case when it goes to a black and white, who gives a rats bum.

back to the penetrator… no fake clouds here – these are all real, yep every single one of them, admittingly I did clone out a bit of another building up on the top left, but it was tiny.. :)

running to where? why? and why away? not back ?

whilst running is probably the natural thing our bodies were made for i find it rather … lets say.. onerous. A swim though is much more enjoyable, don't need to worry about boring things like staying upright or balance :)

don't slip over the leaf or trip on the broken plank

I always love a good cliche jetty shot, couple this with a long exposure and for some reason the scene turns into something out of a dream. Maybe its the vanishing point, maybe its the lack of a boat or lack of a person, or the softness.. i dunno …

To be honest, its pretty well a lazy man's style of shot, not really pushing the envelope at all, but I still love seeing these scenes and they seem to never grow old in my head. I did try and include the leaf to provide a little catch ya attention and really spring that eye back from the vanishing jetty :) . 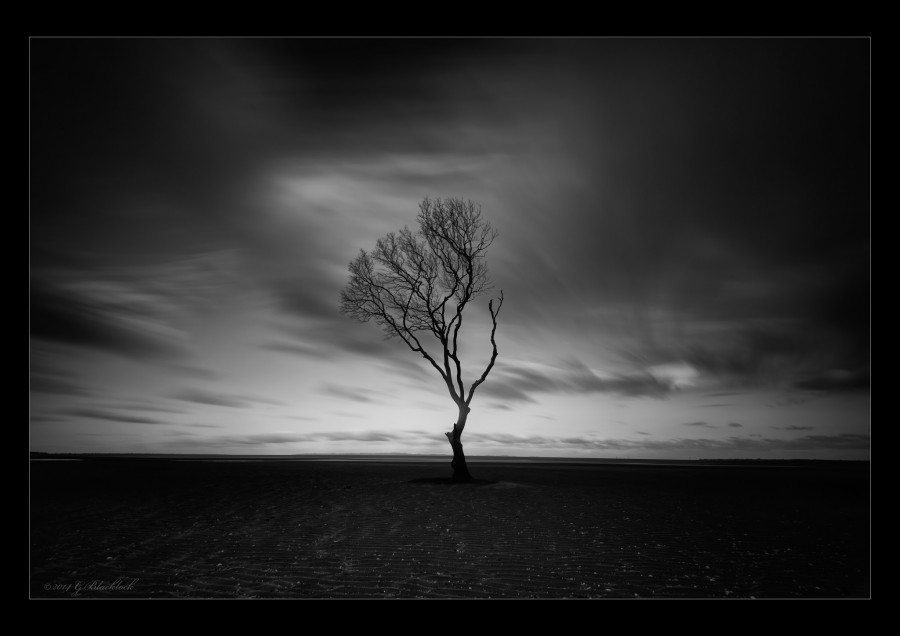 The only reason I got to see this tree , let alone photograph it was due to work (which I am sitting her currently doing, the joys of on call) with a little luck (as strange as it may seem :) ) I may not revisit this location for quite some time, however in the meantime its a location with many memories and still plenty of un-processed images sitting on the harddrive. I am sure down the track I will get to several of the other images that are tagged ‘to do’ but for now as the night closes out and morning approaches – a image to match my mood.

of lone trees on hills
I do have quite the fascination with lonely trees, whether they be on a beach, in some dunes, in the country side or in the bay, and now on the headland, they never seem to lose the appeal.
So during a further investigation of this location (with Rod) via google street view this little old tree popped up while tracking that big smelling poo cannon.

Its a pretty photogenic tree, it could however have a bit more of a lean and possibly be repositioned alittle but hey, all in all pretty sweet. I did take quite a few images of this tree including some obligatory panoramas ;) , the first one that caught my eye was the one with the tree over looking the green, I had wanted to capture it with the golf green and hole/flag in place, but it was well past closing time and all the green hole flags had been removed.