Not a bad effort for a 10 year old, day 3 had 100+km, there has been fields of wind turbines, cows, koalas and seals.

Hats off to Sarah Joy for keeping up with her 🙂

END_OF_DOCUMENT_TOKEN_TO_BE_REPLACED 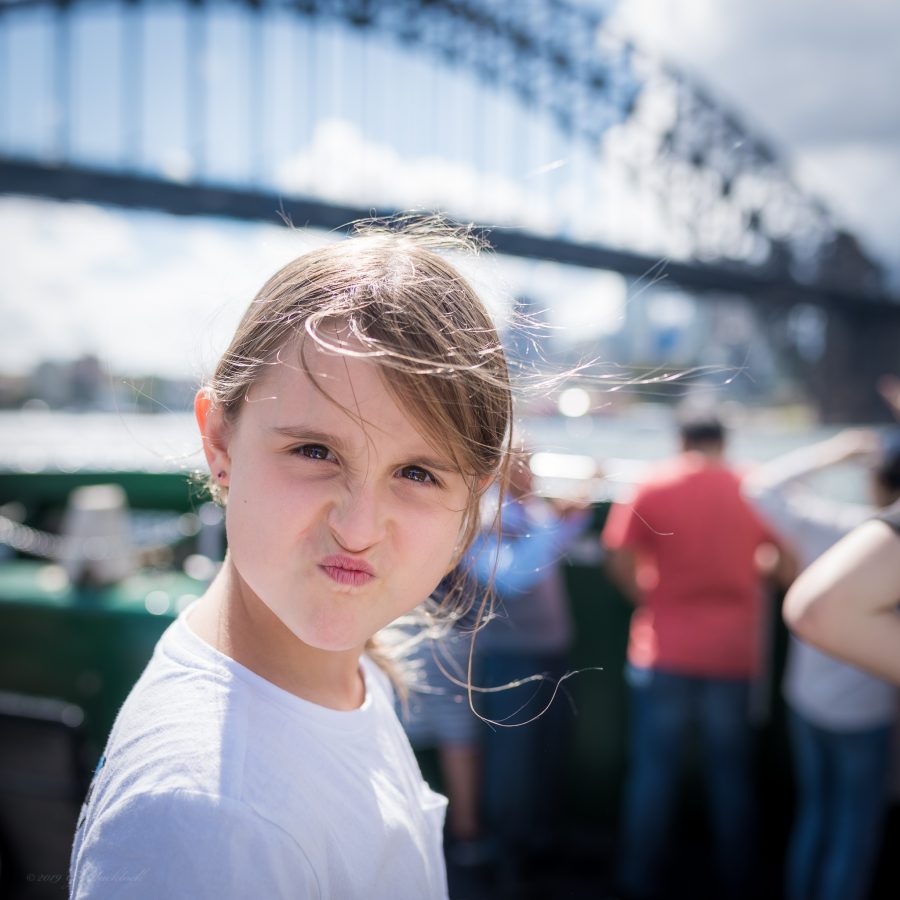 So what… its the harbour bridge
(C) 2019 Gerard Blacklock, all rights reserved

Don't let those soft brown eyes, the flowers and the smile fool ya 🙂
There's a wild streak in this one too 🙂 scrubs up alright tho 🙂

nailed it 🙂
Put 'em on the dunk tank seat and let the teacher control it 😉
I do see a few logistical issues, but all in all I reckon its a pretty good idea.

yups, you guessed it, tomorrow night is halloween night.. lock up your houses, shut the gates, close those curtains and pray those sugar crazied children walk on by.

If this one knocks on ya door, i can suggest..
1) don't make eye contact
2) empty anything with sugar in it onto the porch, that includes raw sugar.. thats a winner
3) and most importantly of all.. do not .. i repeat.. do not engage in any conversation, the power of this childs ability to talk anything down is second to none 🙂
4) close the door quickly and pray, if not pleased, this one will knock again…..and again .. and again…. her persistence is resolute.. your resistance futile.

will stop us going out for a hunt at low tide.
Probably the only thing that will stop us is when we stick our finger into something that bites !
Its always great fun to trawl around at low tide and find all the creatures hiding in the rock pools waiting for the sea to return.
This particular day was filled with starfish, seaslugs, crabs and finger eating sea anemones..

…when its raining and with kids and have a picnic.

I had promised Tickles I would also take her to see the vivid lights after last time leaving her at home and only taking Chaos, so this time we prepped up with homemade hot soup in thermos's, snacks, bread and soft drink (settle people this one has got less sugar than orange juice 😉 and I needed some bargaining chips 🙂 ) and headed into battle.

So we busted our way down to Kirribilli and had a giggle at the throngs of photographers losing their lollies over the 'puddle' shot 😉 and setup for our picnic. It was pretty nice, hot soup, great view and company that pretty well refused to to let me take any pictures (i did sneak a few in tho 😉 ) – on that note, the only opportunity to get a shot of chaos and tickles where they would let me, I could not for the life of me (in the split second I had 🙁 ) remember how to adjust the flash to rear curtain sync, the last time I did that was like 4 years ago 🙂 Its very useful for using the flash to get some light on the subject but allowing the shutter to drag (ie 1 or 2 seconds), long enough to pull in some the light in the background, hence my only shot of the picnic was crap, but its a nice memory.

So about half way thru our soup tickles pipes up with 'can we go on the bridge?' ….. yeah sounded like a great idea at the time, but when the good folk 85 years ago built the harbour bridge they did not really have dudes with prams in mind, i had to carry the blasted thing loaded with stuff up 5 flights of stairs, at least the cycle side (western side of the bridge) has a little ramp in the middle… that would be like really useful on the eastern side too.
Anyways we trundled across the bridge ohh and ahhing at the lights and we even made it to the south pylon where tickles promptly fell asleep, chaos and I were like … c'mon man it was your idea! Then it rained. I guess she timed the sleep well I suppose. So back across the bridge in the pouring rain, some might say a umbrella would have been a good idea at this point.. but real men don't use umbrellas 😉 they also carry their pram and child down 5 flights of stairs 🙂 Did I mention a ramp would have been useful?
All credit to chaos tho, not a single whinge at all and even when we could not get a icecream, seriously it would have got washed away 🙂 she stoically battled on 🙂 h/t chaos.

I am not sure what enjoyed more, watching Tickles ride around Sydney Park for the first time or watching others get out of her way. Not bad for a first effort, just need to work on the application of the braking system, not so much the ability to actually use both the pedals and both handbrakes but moreso to use them in a more gradual application. We certainly broke in that new bike and the tyres, each application of the brakes resulted in a black rubber streak on the path 🙂 and mostly me or someone else tripping over her 🙂 One complete lap around sydney park definitely deserved an over priced icecream…Well done to Chaos also for being a helpful big Sis with plenty of encouragement and the occasion threat 😉

Being a parent can be a bit of drag somedays, the busted knees from too many legs rides, the crook neck from piggy backs that have gone wrong, the cramps from being squeezed out of bed in the middle of the night – just to digress for a moment.. seriously that bloody song about 10 in the bed and the little one said roll over… thats me, I move an inch and there are two little bodies there immediately to fill that gap and thunk, i end up plastered against the bedside table or on the floor…anyway, thats a few of the negatives…

There are however, moments that will remain with me forever – one of which is when we walk to school, the feeling of that little hand sliding into my mine without either of us barely noticing, a automatic action as we dodge the trees and poles on the walk, that little hand just returns and slips into mine. As cliche as it might sound, that action speaks thousand words,all of which would not even come close to expressing the feeling…

…. then we get to school and its yep.. barely a 'see ya dad' as she disappears off with friends to plot the level of chaos. Thats alright tho 🙂

hey onto lighter notes, heres how to ruin your knees in 2 easy steps, the first weighs in at about 15 kilos and the other over 20….

I gotta say Chaos has a rather uncanny knack of being able to catch animals and chickens are no exception, she can pretty well pick up every chicken and give it a cuddle in the space of 5 minutes, most importantly as well, without traumatising them 🙂 Tickles even gets in and has a go, she caught her first one the other day and I think she was more surprised than the chicken 🙂

The girls even got to have the eggs for breakfast the next morning, they got a much higher rating than the ones from the shop 🙂

The garden plot is going well too, you can see Chaos posing nicely in front of it with the selection of corn, capsicum, beans, sunflower and a whole bunch of other unknowns which they threw 🙂

To all those punks who said said it gets easier, what a crock of horsepoo! we are fending off marriage proposals and family planning, although I am hoping that the wiping the snot on the sleeves (and everywhere else) might keep them at bay for a bit longer 🙂

This was a really nice walk along the beach with a storm threatening overhead, nice temperature and really soft light, perfect for photography. For the record, there was no instruction on posing or anything, actually its very rare I get anything but a scowl or funny face when taking a picture 🙂 in this case Chaos said, 'wait a sec' and bent over, flicked her hair over and struck a pose… i blame school 😉

So apparently this rock is pretty famous and a favorite for photographers, however they neglected to mention that to get the cool cliche shot you really need to be there at sunrise to capture it with nice light, which in summer, is kinda not realistic with small children 🙂 However, what is amazing is the level of detail that cameras can bring out nowadays, you can pretty well underexpose the shot to capture all the bright bits then draw out the shadows, even in this scene, which is the worst for it, shooting right into the sun i was amazed that you can bring out so much detail and make it a bit edgey to boot 🙂

So here we have Chaos with her tourist pose on doing a great job of showing off the scale of this rock, which by the way is a lot smaller than it looks in pictures.

When it comes to their birthday party get them to make the party food, it has several distinct advantages, like – keeps them occupied, they are gonna eat the food anyways, irrespective of what it looks like 🙂 they can't blame you for the food and also you have someone to blame if everyone gets crook 😉 (which did not happen btw:) ). Now we will brush over all the disadvantages, like, increased cleaning etc and finding child #2 licking chocolate icing off the door frame 😉 (I do have a photo but am not allowed to show it 🙁 )

So, happy birthday Tickles and thanks to big sis aka Chaos for all the help particularly the excellent direction in blowing out candles, snaffling extra lollies from the party cups and generally, lovingly living up to your nickname 🙂

I suppose Sarah Joy did pretty well too, helped the kids make the food 🙂