Happy 7th Birthday Tickles.
You are a patient, kind hearted example of the human species and there is a lot we can learn from you :)
Thankyou also for introducing me to ‘Pusheen’ (thats a fat animated cat thing for all you peeps under a rock:) ) I suspect our house and bank balance will never be the same – they are however so soft and cuddly ;)
Sh$t yeah…
best to stay a kid tickles. 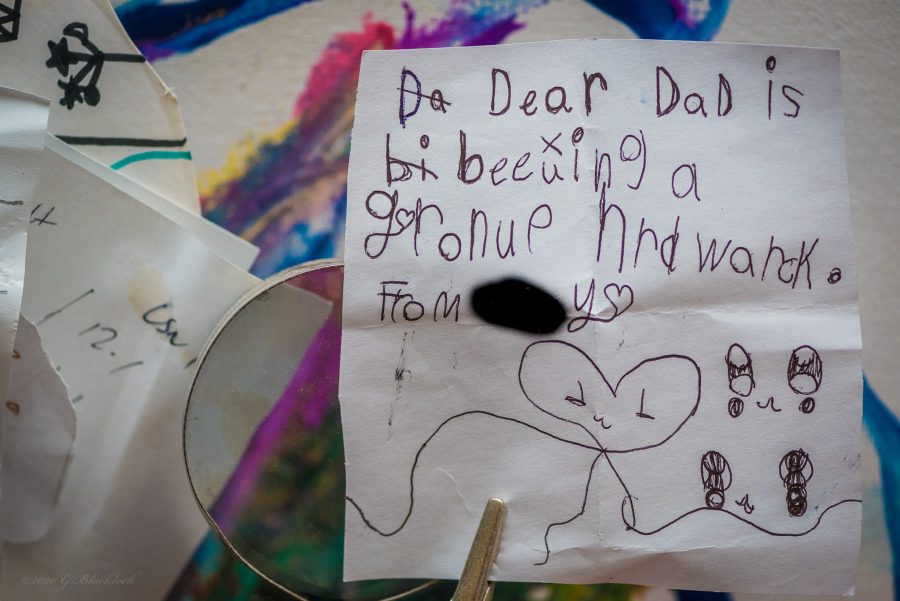 I am not sure what enjoyed more, watching Tickles ride around Sydney Park for the first time or watching others get out of her way. Not bad for a first effort, just need to work on the application of the braking system, not so much the ability to actually use both the pedals and both handbrakes but moreso to use them in a more gradual application. We certainly broke in that new bike and the tyres, each application of the brakes resulted in a black rubber streak on the path :) and mostly me or someone else tripping over her :) One complete lap around sydney park definitely deserved an over priced icecream…Well done to Chaos also for being a helpful big Sis with plenty of encouragement and the occasion threat ;)

well tickles, it is a few years older than you ;)

Ya gotta love kids.. well most of the time anyways.. as tickles refused to go to sleep and insisted on watching me look at photos said, ‘you like taking photos’? i said ‘yup’ to which she replied ‘they are really nice dad’. :) might have had something to do with the fact that I previously said I would let her sleep with her jelly-straw (Japanese semi frozen sweet), she did not want to eat it.. just go to sleep with it :) whateva works for ya I reckon, just go to sleep :)

were made for running on, whether it be up and down, or away from the waves, there is always one thing you will do at a beach (besides swim) and that's run :) guess who slept well this night ;)

(and we have a hair twirler…)

I just discovered the potential of collections in Lightroom :) hopefully a step forward in organising all my images, particularly kid ones :)

Note the red flowers in the background, the time between the first and last is pretty well 2 years on the dot, done to the month :)

I'll let ya'all into a parenting secret (besides the 'dont have kids one' ;) )

When it comes to their birthday party get them to make the party food, it has several distinct advantages, like – keeps them occupied, they are gonna eat the food anyways, irrespective of what it looks like :) they can't blame you for the food and also you have someone to blame if everyone gets crook ;) (which did not happen btw:) ). Now we will brush over all the disadvantages, like, increased cleaning etc and finding child #2 licking chocolate icing off the door frame ;) (I do have a photo but am not allowed to show it :( )

So, happy birthday Tickles and thanks to big sis aka Chaos for all the help particularly the excellent direction in blowing out candles, snaffling extra lollies from the party cups and generally, lovingly living up to your nickname :)

I suppose Sarah Joy did pretty well too, helped the kids make the food :)

well tickles… have you looked in the mirror today ? by the way.. you know the lipstick… well it apparently goes on the lips :)

I really like this park, its recently under gone some rework to tweak the water course and I gotta say it looks fanatastic and also includes lots more paths, stepping stones and all most important of all, more nice smooth areas for scootering :)

I have recently started running at this park, well running might be a bit of a exaggeration at this point, a slow jog that decreases in speed over the session :) with lots of space and and areas where you can run on the grass (rather than concrete) its pretty unique for the inner west. In the past I have taken plenty of images at this park, particularly of runners silhouetted on the hills and during storms and always made some smartass comment about nutters, I guess thats gotta stop now especially since I did even go running in the rain :)
Chaos and Tickles love this park too, awesome spot for riding the pushbike and barrelling down puppy dogs with the scooter :) (yeah tickles, i am looking at you here)
So, here are a bunch of pictures from a recent visit :)

Well done Chaos, it was a great walk and excellent effort to make it all the way to the bottom (and back up).

This is the second time I have been to these falls, the other was back in 2014,
https://plus.google.com/+GerardBlacklock/posts/KfyujBwQcfB
its such a great spot and I would love to go back again, needs a bit more water than what was there on this particular day with the girls.

No bad for handheld either :)

So, mum wanted to go for a bush walk for mothers day, after presenting the idea to Chaos she promptly choose a the Blue Mountains and more specifically a spot near Blackheath called Mermaid's Glen which we had been to previously. I did say to her, 'thats a long way (in kid terms anyway) to got' to which she responded (quote) ' yeah, but it's worth it'. On that note the trek was decided, with one minor variation, Leura Cascades might be a easier option with Tickles in tow.

Everything did conspire against us, rain, hazard reduction burning and lots of smoke, but we made it and not to be deterred by alittle rain we donned the raincoats and barrelled on down the steps along side the Leura Cascades, its a great spot and such a nice walk even with the kids, both kids made it all the way to the bottom of Bridal Veil falls and even to Weeping falls, where we stopped or some lunch before making the trek back out. Its a fair walk with quite a bit of elevation to be covered, there was some whinging.. 'pick me up' …'pick me up' but all in all, they did very well. Tickles walked about 75% of the way and Chaos about 95%.

how much fun can two kids have on a hill?

This reminds me so much of my childhood, we did not have bundles of toys or the latest game console (think original.. yes the original and first nintendo console :) ) but we made our fun on our pushbikes in the parks, bush, local creek or anywhere else where we were probably not allowed to be :)

Its great that in Sydney we do have alot of open spaces and parks where we (and the kids) can go and ride pushbikes and get outside. Sydney park is one of the great spots I reckon, only slightly ruined by the large number of free roaming dogs (and the resulting dog shit from inconsiderate owners…). This hill is a particular favorite of mine, we can watch the NYE fireworks from here, have a BBQ (on the new electric BBQ's), roll down the hill, run up the hill, run around the hill, walk around the hill, sit on the hill, watch planes from the hill, watch other people from the hill, ride bikes up the hill and yep you guessed it.. ride them down :)

on this day, we chose to run up and down the hill, in a exercise that ding-dong daddy (thats me apparently) calls energy extraction No 5. It involves them (chaos and tickles) running up the hill then down to be caught by me and thrown up into the air (that part is called damaging ding-dong daddys back, but as you know we do anything for our kids :) ). and for some multitasking talent I even took a few photos during the process :) 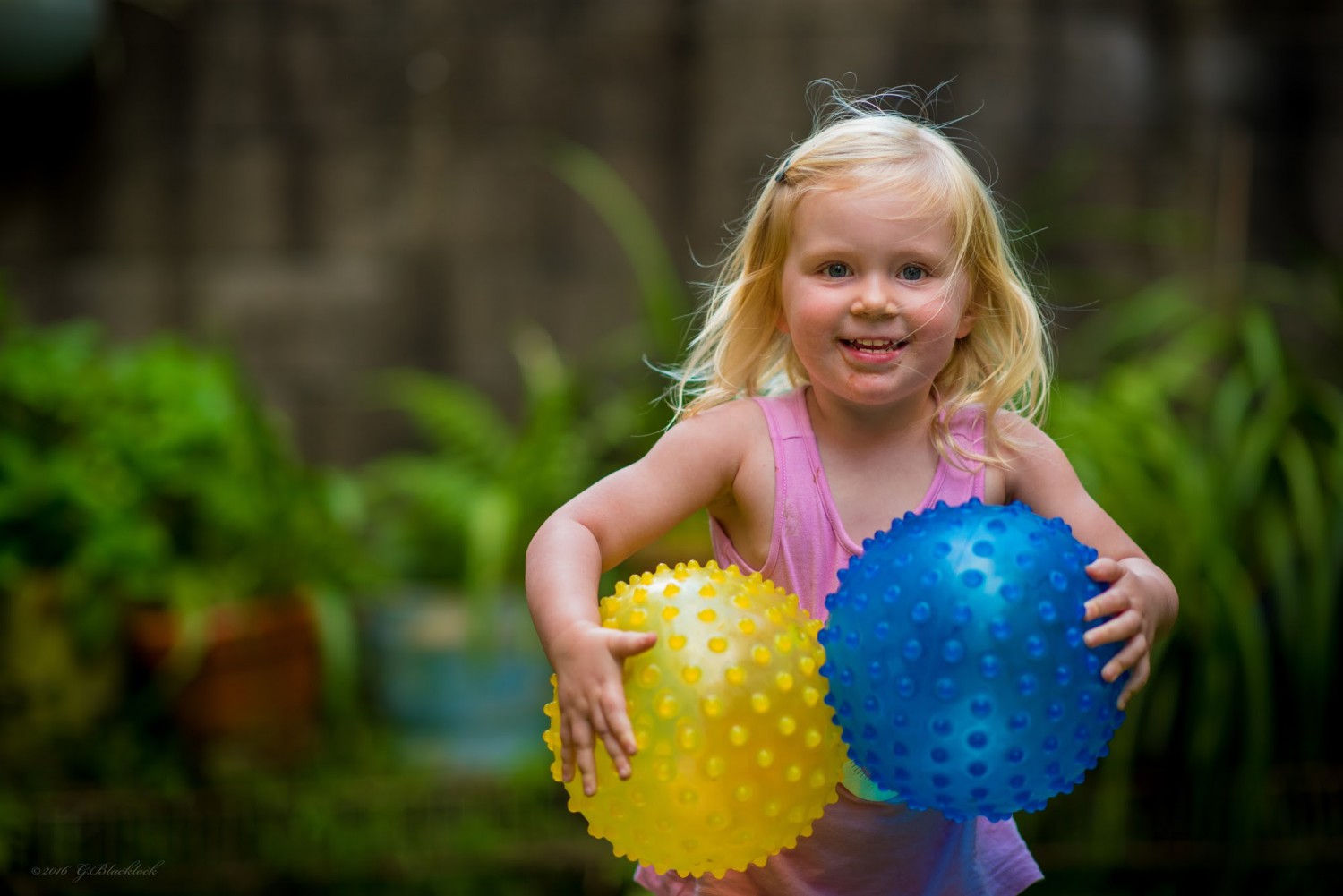 note the slightly crazied look, accentuated by the remnants of chocolate Easter egg around the mouth and the quintessential snotty nose ;)