Well it has been several months since logging on to smash a few pimpled faced teens in the cyber world of Counterstrike – so the other day I had a few minutes to spare so I fired up Steam and Gamearena only to find it wanted to update, no surprise really – however the 600mb download was a giveaway that something significant had changed!

So from the official sources;

The #1 online action game in the world, Counter-Strike: Source (CSS) has just received a major update and is now available for the Mac. CSS is a SteamPlay title, so if you own it on the PC – you own it on the Mac. Besides PC Vs. Mac cross-platform play, this update also adds achievements, stats, engine updates and more.

New match and lifetime player stats and summary screens give you insight into how you play. You can tracks your kills, your deaths, and compare yourself against other players. Learn your accuracy with each weapon so no more guessing where you should be spending your money.

Over 140 unique achievements have been added. The achievements cover everything from defusing bombs and winning pistol rounds to dominating your first foe. Can you kill 5 opponents with a blast of C4 to earn the “Clusterstruck” achievement?

Can you earn MVP by getting the most kills or defusing the bomb? Always know who on your team is contributing the most with the end round MVP award. And all your favorite Steam features have been added including avatar pictures, domination icons and more.

A new Death Cam that shows who killed you. The new domination and revenge system makes it personal. We have also included various Source Engine updates, bug fixes, and more. 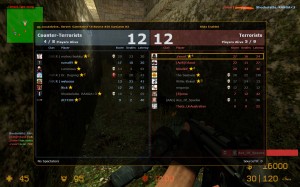 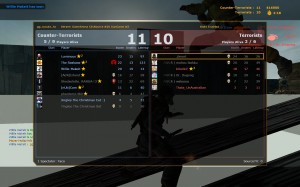 which is a far cry from the the previous version which I played in July! 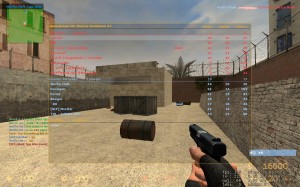 which, when compared to a screenie from 2005 ear, things were pretty much the same back then! 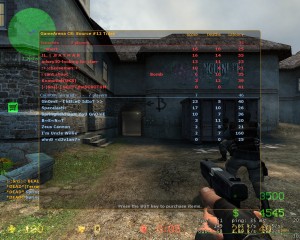 and before that, in the stoneages of Dialup internet..wow, that makes my head spin, crazy times eh? CS and dialup, brings back memories of my trick gateway server and my beloved roadstar modem, which by th eway was USB and worked like a dream under Redhat – back before it turned into the Fedora shitfight..now its pure Debian all teh way..but I am getting sidetracked, where was that screenie again? 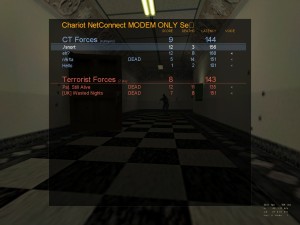