emotion, light and airy and smelling a bit like…
North Bondi, Sydney Australia, showing the ironic dichotomy (check that phrase out.. 🙂 ) of a somewhat natural scape vs mans imposing structures.
The subtle colours, particularly the pink and purple really struggled to shine on this even, however this little tree standing proud and defiant against the man made version, I feel, give this mage something to offer. To me I see emotion here, yay 🙂

unless its next to a septic pit 🙂
Welcome to the 5th hole of the Bondi Golf Course, if you have made it this far you will be punching for a 280 metre drive (yeah i can do that lol) up towards the poo factory. Don’t slice it.. at any point or your little golf ball is gonna get some serious airtime as it departs the course and becomes a whale gall stone 🙂 do whales even have a gallbladder?

So you can see the photobombing Rodney Campbell down on the right whilst working his tripod for a vertical pano that you can see in this shot (https://plus.google.com/102418874970398612673/posts/gTZ2zLzSuHQ).

The sunset was unremarkable, even without the clouds there was not much in the way of sweet pastel colours, nonetheless I like the lines the green and fairway made here and once again my main subject feature is smack in the middle and the horizon is also pretty well in the middle, rule of thirds lovers are gonna hate 😉 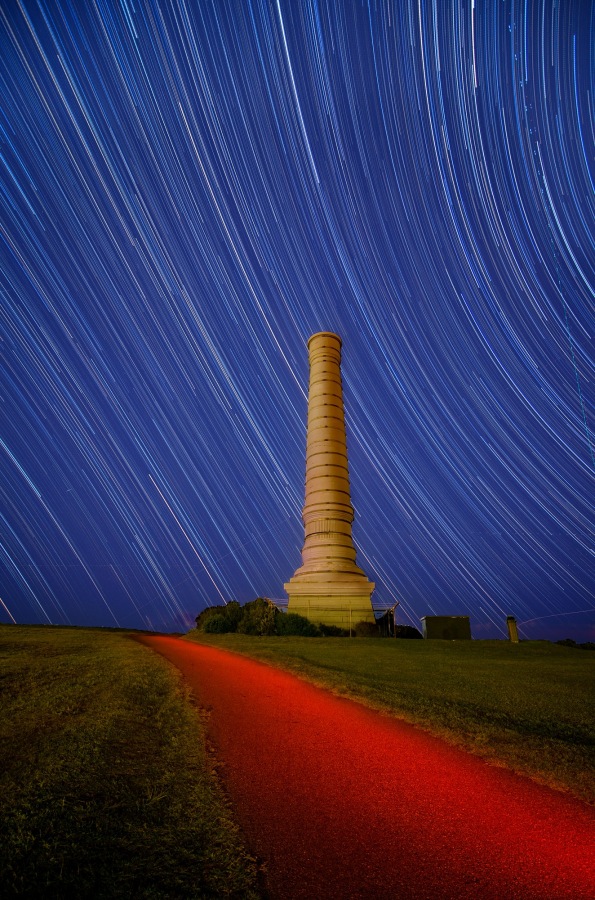 stand back, we have a new means for waste water treatment

The cosmic poo cannon, during daylight hours can be seen here http://blog.avernus.com.au/prelude/

Given the time of month and the lack of moonage, i was keen to get out and do some star trails, without having to drive a million miles to a dark place. After the failed attempt from the previous week with Rodney, I was itching even more so. I had planned to get out during the week but the fickle weather prevented it.

I have had a few potential sites in the back of my mind for while, Sydney park, Kurnell (multiple poo cannons there), malabar and North Bondi (super poo cannon), after looking at a few older shots of the super poo cannon (http://blog.avernus.com.au/prelude/) it really looked as if it had lots of potential, with the only unknown being (beside never actually having visited there) being the amount of ambient light that may spill from the adjacent apartments and streets.

After a wonderful sunrise at Coogee (Ross jones pool) with Rodney and half of Sydneys other photographers ;( I mentioned it could be on the cards if the weather was on – the rest is history.

So here we have – Cosmic poo cannon
Taken in Australias largest city with probably some of the most light pollution around – just goes to show, you can do star trails pretty well anywhere 🙂

Techie stuff
151 images stacked together using the statistics method in Adobe PS CC
The foreground shot was just a simply red LED torch applied to the path leading up to the poo cannon.
Opted for longer shutter to reduce the file numbers (read as running outta disk space)

Lovely jubbly and thanks for looking – I welcome any suggestions, comments and improvements to my photography, they are always warmly welcomed and always appreciate the time people take to have a look and/or comment.