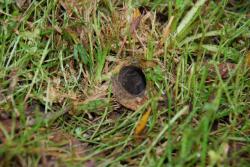 Quoted from: (excellent, informative site – the pic on the left is one of my many holes!)

The Sydney funnel web (and a few related Atrax species) is unquestionably the most dangerous spider in Australia; the red back and the paralysis tick are the only other two arachnids with potentially fatal bites.

Geoff Isbister has authored a nice review of the management of spider bites on the Australian Prescriber website.

The AVRU has a page on spider identification with some nice photos and a description of their behaviour. The Australian Reptile Park pioneered funnel web venom milking and is the sole supplier of venom to CSL for antivenom production, and they now have a specific spider exhibit. If you capture a live funnel web please take it to one of their funnel-web collection points. Their comprehensive information about important Australian spiders makes fascinating reading.

Female funnelweb on the left, male on the right.

This is one mother of a spider!

It is a large (6-7 cm), black, aggressive, ugly looking spider with massive fangs. These are large and powerful enough to easily penetrate a fingernail. When disturbed it tends to rear up on its hind legs, a defensive posture that exposes the fangs. They don’t jump. During a bite the spider firmly grips its victim and bites repeatedly; in most cases the experience is horrific. The venom is highly toxic. Before an effective antivenom was developed, significant bites usually resulted in severe symptoms and death was not uncommon.

The Sydney funnel web spider is mostly found near Sydney (from Newastle to Nowra and as far west as Lithgow but sightings have been reported as far north as Brisbane. Related species are found along the eastern coast of New South Wales.

The venom of the slightly smaller male spider is five times as toxic as the female. This is unfortunate, as male funnel webs tend to roam about, particularly after heavy rain in summer, and often wind up indoors. The primary toxic component is atraxotoxin, which alone can cause all the symptoms. The venom also contains hyaluronidase and other components (GABA, spermine, indole acetic acid). For some strange reason, human beings (and other primates and monkeys) are particularly sensitive to the venom, whereas toads, cats and rabbits are almost unaffected!

The bite is usually immediately painful, and if substantial envenomation occurs, symptoms commence usually within a few minutes. They include, progressively:

After about 2 hours the muscle fasiculations and most symptoms start to subside, and are replaced with insidious but profound hypotension, primarily due to severe cardiac failure.

All bites from big black spiders should be managed as suspected funnelweb bites.

The pressure immobilisation technique MUST be commenced as soon as possible. Any delay risks the rapid onset of systemic symptoms. There have been no reports of deaths when effective first aid had been instituted.

The patient should immediately be evacuated to a medical facility capable of managing the envenomation. Treatment will require giving antivenom, providing artificial ventilation, and invasively monitoring the patient. Bandages MUST NOT be removed prematurely.

There is evidence that the venom may inactivated by prolonged localisation.

Institute intravenous access, adequate monitoring (iv, SpO2, non-invasive or arterial BP) and obtain antivenom BEFORE removing first aid bandages! An apparently well patient may suddenly deteriorate when they are removed. If nothing adverse happens within 2-4 hours of bandage removal the patient may be sent home.

The moment symptoms or signs of systemic toxicity develop, the antivenom should be administered intravenously. The initial dose is two ampoules and can be repeated every 15-30 minutes. Supportive management, including oxygen, iv atropine, antihypertensives and sedation is usually required even if the antivenom is given. If the antivenom is administered early, the clinical situation is unlikely to get out of control.

The antivenom is a highly purified rabbit IgG immunoglobulin and is highly effective; it should be given as soon as signs of significant envenomation are seen. Prophylactic adrenaline is not required, nor steroids, and there have been no reports of adverse reactions following its use.

Occasionally bites from the mouse spider or other atrax species may develop similar symptoms; if these are severe enough it may be useful to try funnel web antivenom.