why, i really dunno 🙂 but rest assured its gotta be original 🙂

This image is a single shot of one the larger sculptures this year known as 'Signed' by Jonathon Leahey. The lighting in this one is pretty simple, lots of blue EL wire on the ground and flowing out from the pole, this effect is pretty easy to achieve by holding one end of the EL wire to the pole and shaking it slightly then letting it go and dragging it across the ground towards the camera, or radially away from the pole.

The red colour at the base and also on the top is by shining a red torch. The great thing about these kind of shots is that they are super easy to edit, very little required and all the hard work is done during the capture of the scene.

I dunno who made this sculpture, but rest assured it would have taken them a long time 🙂 pretty spherical too, not bad for a bunch of bamboo bits and some tie-wire.

Its that time of the year again and the sculptures by the sea are back, however this year the sea has kinda protested and swallowed a few up. The 5 metre swell that was about was certainly a sight to see and hear.

Single image with a red torch and some crusty old blue EL wire. 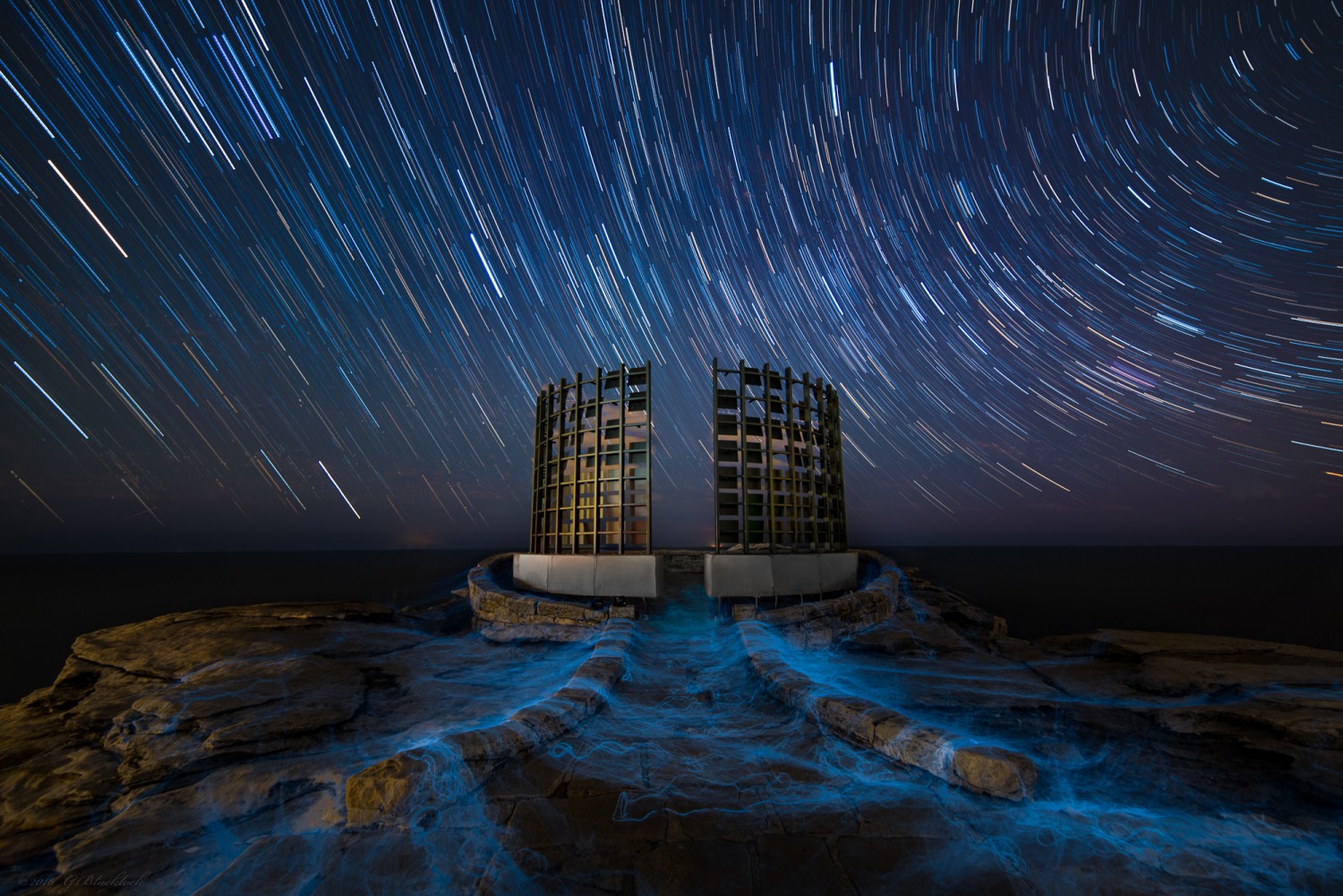 34 images, loaded into PS via statistics (maximum), cleaned up the plane trails and few annoying clouds then blended via the lighten mode.

Foreground shot is a separate image, from the same spot with some light painting. 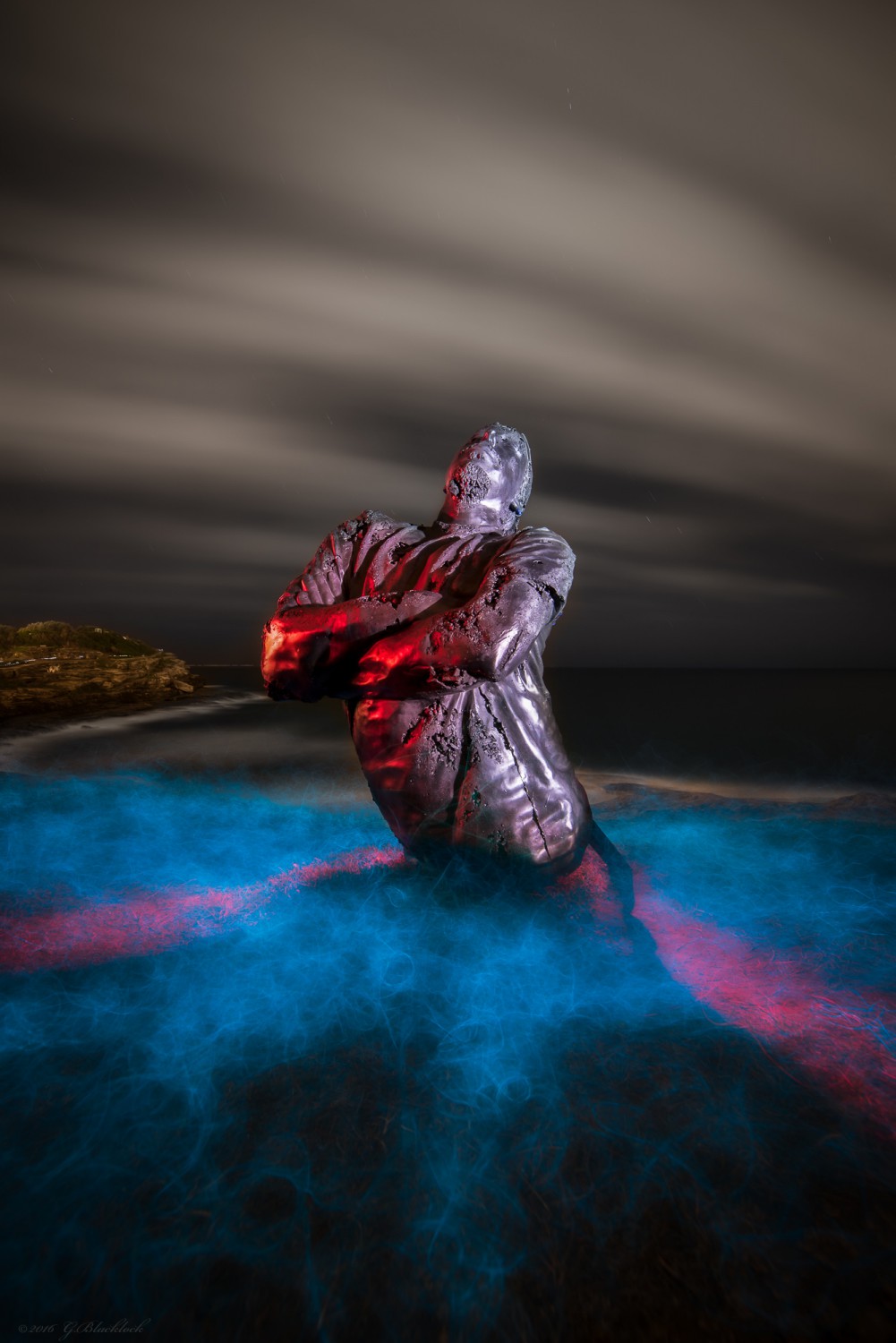 Sculptures by the Sea at Bondi/Tamarama 2015

King Coal, coal, resin, fibreglass and steel, 172 x 101 x 119 cm
An arrogant, larger than life figure representing Australia’s reliance on coal
“I wanted to anthropomorphise coal. The figure needed to exude arrogance, an unwillingness to change and seem unaware of his impending doom.”

I reckon the evening clouds streaking across the sky compliment this sculpture and the artists vision, one of many unprocessed images from last year 🙂

Down here, where things bleed blue and your path is strewn with fallen comrades, nothing escapes…. and there is no light at the end of the tunnel.

Rest easy fallen mechanical prawn 🙂 your in a better place.

Cheers to Rodney and Deb, don't think i would have ventured in here by myself 🙂 let alone walked the whole 1.5 kilometres.

enjoy the view while your there

Another installment in the Sculptures by the Sea exhibition. The tree was very cool, the delicate construction of the sculpture has me amazed 🙂

Pretty simple lightpainting on this one, some blue EL wire on the chair and a coloured torch applied at selective spots, finally a white torch applied from the right hand side to give the sculpture some depth.

or maybe the electric chair from hell…

Interesting bit of art, cool angles and curves, but boy, does it comes alive with a little EL wire love after dark 🙂

This premium little spot up on the headland between Bondi and Tamarama lends itself to pretty well anything you put in it, from the geodesic dome, to the big head blowing bubble gum to the wind chimes, they have all looked pretty sweet at this spot. I reckon tho, the dome was by far the best so far 🙂

This art installation is part of the sculptures by the sea 2015, its got mirrors on the other side which would look pretty cool at sunrise, but other than that I go not idea what it is or what its meant to do or represent 🙂 but it does look pretty cool with a little extra lightpainting and torch work.

I timed this 450.6 second exposure with the moon just rising, i am pretty keen to do a set of star trails on this spot as well, even with this relatively short exposure (from a star trail point of view) the stars stand out pretty nicely.

Just a little something I have been meaning to do for awhile now (not burn down cars btw) – burnt out cars are not overly common where I am, however common enough that in the space of 3 minutes of me setting up my tripod for a couple of quick snaps I had some good friends from the fuzz turn up 🙂 I think the baby/kids seats in the back convinced them i was not gonna burn a car down lol..

One solution is to take along a torch, which if you have any sense you would have cause its damn dark and you would stumbling around in the dark without one 🙂 anyway you can take this torch and provide a little artifical illumination, its a bit of trial and error but the results can be OK… mostly I have found it pretty hit and miss, and in this case.. well things got a bit too cooked, hence the title compete the artificial rock takes over the image and just about drowns out the for sunrise 🙂

Another point to make about using your torch to light paint, and I bang on about this all the time, is to make sure you use it nice and low to the ground to get some texture, but also more importantly choose where you want the light to come from – don't do what I did in this case and be lazy and just stand next to camera and halfheartedly wave it around 🙂 pick a spot well off to the side and give it a nice flow. Apply more light further away from the camera and less closer to the camera since the closer bit will light up much quicker.. you know light fall off as you get away from the camera.

single frame, LED torch illuminating the rock fence from the right hand side, the other reason for the lazy man option was it was dark and I could not see much and.. there was some big potholes there .. anyways..thats the excuse I am sticking too 🙂

Its just after 5am in the morning and there is nothing but a subtle glow out on the horizon giving the hint that sunrise will happen once more (yeah i know its a pretty sure bet but hey … 😉 ), the sharp grinding and clacking (yeah thats a real word too) of the stones under my feet is the only sound, even the ocean seems to be quiet in anticipation of the sun's arrival.

After finding my favorite spot to setup, its always a good spot to start out at anyway 🙂 I rattled off a shot, guessing the exposure only to find things are still pretty darn dark..hence i thought I would add a little extra artificial light to try get some detail out of the foreground, normally I would not bother and just wait for some more natural light from the sun coming up, however I had nothing but time to burn… I pulled out the big berther torch and added some light to rocks during the relatively long exposure.

The light has created a artificial feel to the scene, however gives the viewer another dimension to look at and engage in, typically the lower part of the image where the black and dark rocks are would simply be rendered black, however 600 lumens of light brings out some detail and texture, which after I took it I thought, thats not so bad. Hence I put a mental note in to try that again next time rather than sit in the dark waiting for the sun to come up 😉

One big problem with LED torches is the colour temperature of the light, they are really cool in colour, resulting in blue cold light, this image was no exception, even without the LED light the scene is very blue with the predawn light, however wit the LED, it was like another world – I have corrected alot of that to bring some warmth back to the light and match what I saw on the morning.