Its like the fertilizer running off the golf course slowly turning the rocks into a putrid mix of algae and shit, slowly infecting the vast mass of the sea.
I was standing beneath a golf course here, the furthest point in the picture… still a golf course.. 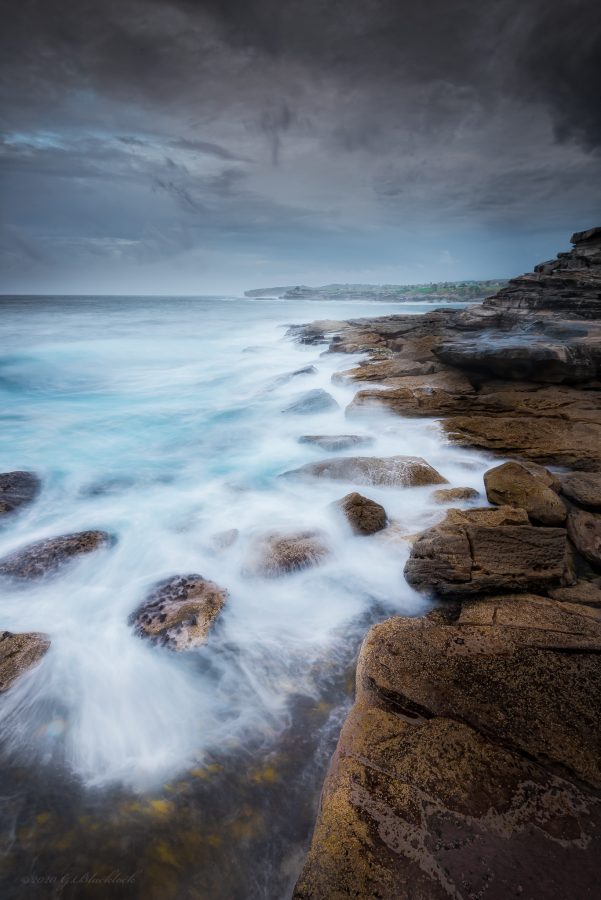 I think I have forgotten how to take seascape shots – i sat here for 20 minutes waiting for decent wave to come up this channel, then sure enough, 2 minutes after I packed up and moved over to another spot, the swell was right and the wave came … 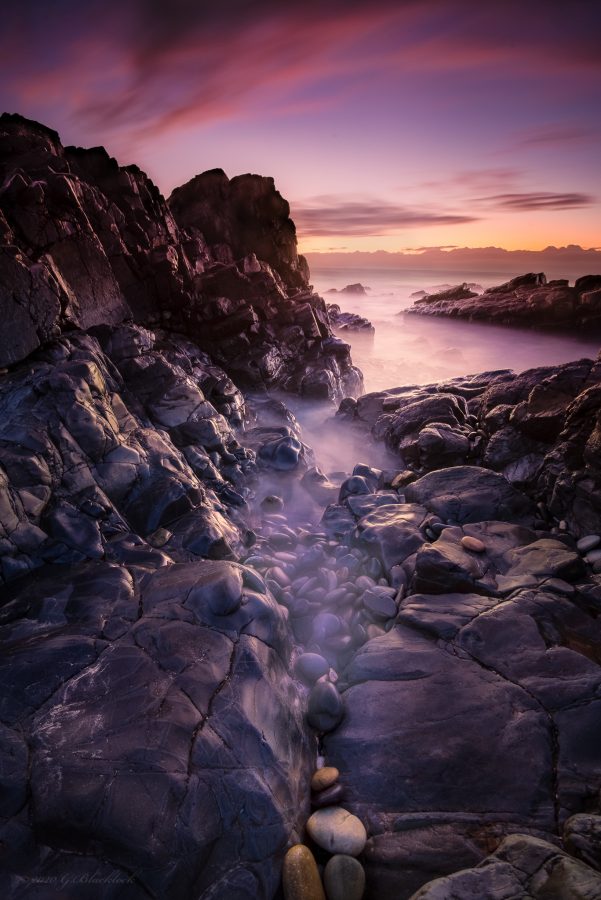 Climate. Its simple, Newton wrote a bunch of clever laws one which can be drawn on as an analogy for for this.For every action, there is an equal and opposite reaction, maybe forget the equal part for now… so you put 7 billion earthlings on the planet, cut down half the trees, decimate the ecology, poison the air and water (I have just got those two tailing dam collapses in Brazil in my head at the moment, you know there was one this year, by the same company which f’ed up the tailing dam 5 years ago – Vale.. why does that not garner a bunch of outrage ? ) and eat most of the available meat (think fish here) on the planet and there is gonna be reaction.. just taking a punt here, but thats probably not gonna be a good reaction… if we are seeing any level of this reaction in our insignificant lifespans then sure as shit something is going on… its not rocket science, which segway that shit into NASA, last time i checked they had something to say about ‘Climate Change’… just go to their webbie and read the bit about “Facts – evidence” 🙂 and remember these are the people that put people on the moon, thats a bit harder than it looks, commonly referred to as rocket science 🙂 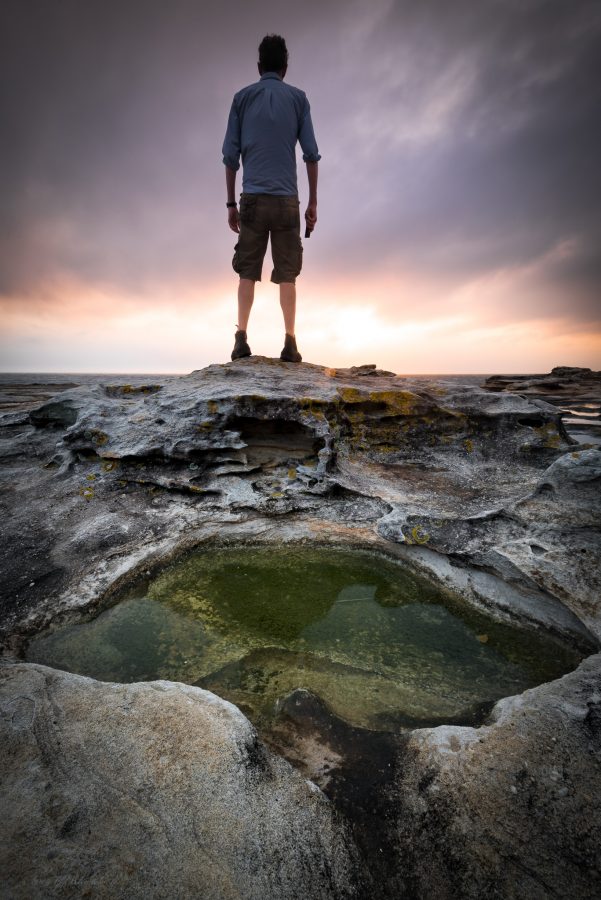 That there is a lonely old rock with some cool rock weed and a neat water flow. I have really missed taking pictures of the ocean, you can turn even the most boring old rock into something nice with a bit of water and colour.

The conditions on this particular morning were quite interesting and photogenic, the sun really held out for ages and consequently i ended up with 14 million images from the morning… i did only edit a couple so I reckon this folder deserves alittle more love 🙂

I quite like this one – similar to a previous one, however just two shots stitched into a panorama, the second shot really only accounts for about 1/5th of the total image, however it is on the right hand side and gives the sun and its rays a bit of room to breathe.

the green end at that

So the story has it, the rainbow serpent lived in waterholes and was responsible for shaping and naming significant places in Australia. The thing I find interesting is that its a story that is consistent, with variations across all parts of aboriginal cultural, i also remember as a kid reading a few different versions of the tale. One such one was where the serpent ate lotsa people and while he slept (after eating so many peeps) he slept and the others came up and slit his belly and everyone got out :).. the serpent got cranky after that 🙁

There is much more to it (Rainbow serpent story) than my lame 2 sentences, however the partially exposed rock at low tide with the green moss reminded me of the Rainbow serpent, hence the title.

yep, up there, thats a bride and groom in the throes of….

passion..whilst being photographed 😉 well maybe not quite passion…

Hats off to the couple and the keen bean photographer's, its a fair old walk down here to the cape and the last time I wore high heels (ssshh.. ! 🙂 ) i can imagine that it would have been hell for the bride 🙂

It was a quick grab shot as I was heading back up towards the golf course, I turned around and the photographer had perched them up on the edge with clear instructions to stand very still 🙂 .. which was kind of them, meant they were not blurry in this 1.3s exposure.

Whale beach is tucked away up on the far far reaches of the northern beaches of Sydney, so far north I nearly needed a packed cut lunch 😉

I joined +Rodney Campbell , +Deb Mooney and Ron who had planned a morning session up here.

I am never surprised now to see surfers at the strangest locations, rest assured if there is a wave to be had, its guaranteed that some surfer will sniff it out!

As I was walking out onto Cape Banks I noticed the swell was pretty favorable on Cruwee Cove, which probably does not happen that often since its relatively sheltered from the open ocean, then sure enough the little dots bobby up and down in the whitewash were there…shark food?

That was not the only sight I saw, silly me thought there would not be many people out here on a Monday night :), so on I walked and past, one model shoot on the cliff top, one engagement shoot (i assume), one wedding couple next to the old shipwreck and finally a bunch of enthusiast photographers 🙂 Definitely not the quiet stroll i was thinking of 🙂

Anyway's, out here on the gateway to Botany bay the waves were pumping, after setting myself up on a very large (and high) rock I was surprised to find that the rock I was standing on vibrated quite a bit when the waves smashed it at the base… after which I found another rock to rest my ass on, one which did not shudder everytime a wave came thru!

2 shot pano, it was meant to be a 3 or 4 shot one, but the poor old stitching algorithm in PS struggled with all that white water 🙂

I dunno whether the fishing is really any good here, but everytime I head out this way there is always a plethora of boats just off the coast trying their luck.

See if you can spot the rock fisherman, hes pretty small in the frame, and the only other dude (besides me) to be silly to be out at this early hour. 🙂

The very most southern point of Chinamans beach and the limit of where you can go unless you have 'authorised access' to enter the bombing range 😉 I have always found these kind of signs quite humorous, since they will often state you must be authorised.. well it does not say I can't authorise my ass over the line :). This place did have a slightly expanded version of.. 'proof shall lie upon him'.. referring to the authorisation.. I did think that if it was a woman you would be sweet, it does not apply 😉

I am sure the lawyers would disagree with me tho…

It was a bland morning (the next was absolutely stella, yes I was in bed for that one!)

but the low tide flows were interesting and I did not mind the warm sunshine from the rising sun it did at the very least create some nice tone in the sky.

so, apparently Periwinkles are gonna become the next big seafood sensation 🙂 I say, good luck with that, especially if your dealing with the dinky little ones like these…

I actually prefer my periwinkles on the rocks, these little guys are awesome for providing that little bit of extra grip when out on the low tide areas, their little hard shells and the super strong suction on the rocks provide that grip for my sneaky sneakers when balancing my ass to get the right composition…. so i put the call out leave the periwinkles there 🙂 plus.. you know how many you would actually have to eat to actually make a half decent feed ?!!

see if you can find jabba, the original slug from the Star Wars movie 🙂 or maybe just a toad 🙂

I keep coming back to this rock, it was such a awesome find, the tide was at a perfect level, the sky overcast and ominous, it just said photograph me… lots 😉