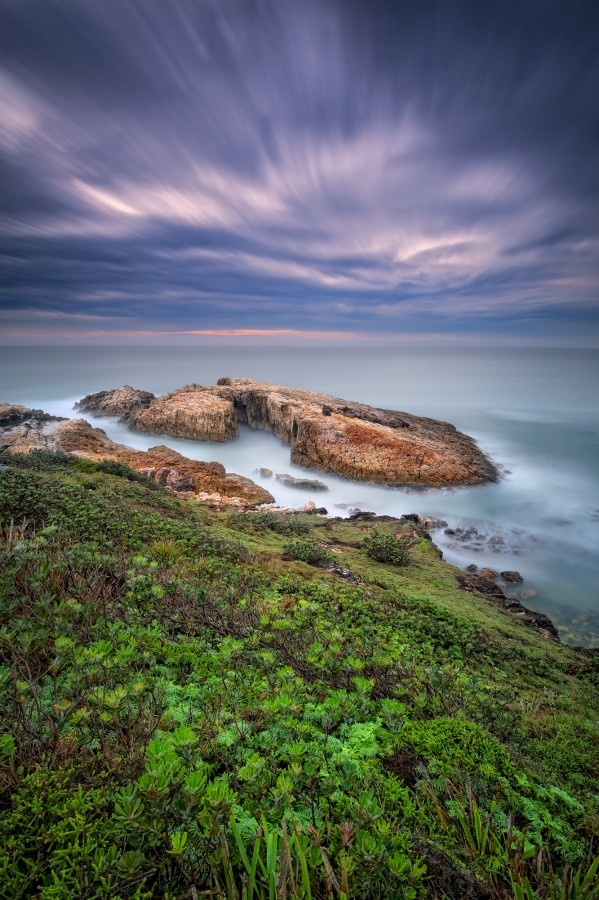 Summer brings with it very early sunrises, like in the order of 5:30am kinda early, this does make it a challenge to get up, travel to a location and get there in time for some sweet light. Throw into the mix the variable weather and of course the prospect of non-sweet light and its one more factor for staying in bed 🙂

I have been trying to get back to this location for some years now and finally I had the opportunity to do so, with no regard for weather or sunrise time I made the venture out, noting that the weather radar indicated showers, just my luck. There is always trepidation arriving at a location (alone), even one with I have been to before, in pitch blackness armed with a torch, a pair of shorts and camera gear, even moreso when its a hike in through the bush, things can look very different in the day 🙂
But, today was different, i had a freshly purchased mozzie repllant spray 😉 which I applied in excess amounts to my bare skin, which consisted mostly of my legs 🙂 I thought.. yeah this will thwart them f’ing mozzies 🙂 and it did… for the first 15 minutes :(…but they were the least of my worries, battling my way thru the dark with one tripod leg held high i was doing hard battle with another forest fiend.. .. the mighty spider that hangs across the path waiting for the unsuspecting walker to face slap..now these are probably pretty harmless (or not who knows?) but the fact that they are fat.. hairy and large and on your face will make even a grown man squeel 🙂

Anyway enough of the bush bashing stories, just imagine me arriving at this stunning location with remnants of spiders on my head and a swarm of mozzies in tow and you get the picture… segway, speaking of pictures, this cool rock formation and some sweet cloud action provided some very nice atmospherics for a short time, all of which screamed at me to be photographed.. so I did.

54 thoughts on “Time stands still for no man (or woman)”