Sydney Opera House
Trying out the Kase Night Filter, its an interesting filter, even used in this situation which is not entirely what it is designed for, it adjusts colour casts typically associated with city lights and light pollution.
One very positive thing about it is the fact there appears to be no effect on sharpness which is always a concern when stacking more glass out the front, in general all of the Kase stuff I have tried (and own) excels in maintaining sharpness.
#kasefilters #kase 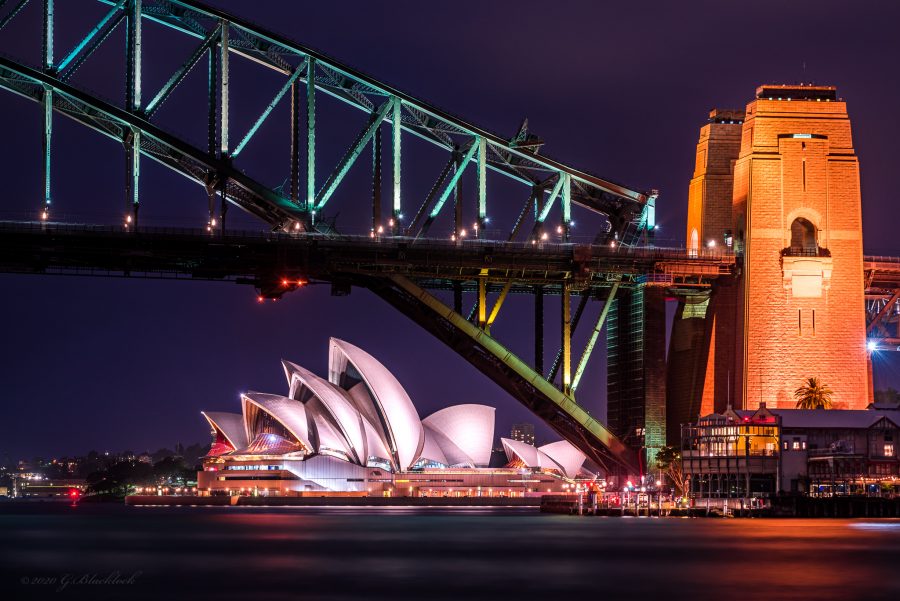 2018 in full swing.. every year I take a few shots from this location (Kirribilli, NSW), i never get bored of this view, its not very creative (like those puddle reflection images you see from here all the time 🙂 ) but I still love it.

There is some really beautiful detail in this image, you can see the projections onto the Opera House sails (LHS), the Harbour bridge climbers, the lights of North sydney.
It can be quite tricky to capture sunset scenes when shooting directly into the sunset or light source, the large dynamic range in the light means you need ot bracket your images, even when the light does become more subtle and soft as when this shot was taken.

This image is a panorama of 3 frames, with each frame bracketed, you can see the result in this by looking at the shadow detail on the opera house and the full rich orange of the sunset underneath the bridge. There are quite a few ways to do images like this, in this case I have automatically blended the individual pano frames in Lightroom resulting in 3 DNG format files, these are then sent to Photoshop to be stitched together, there is then a bit of wrangling to ensure the perspective is correct and just some usual adjustments to accentuate the scene.

I found the reflections 🙂

Its a pretty wild place. Driving back from a sunrise session the other day I passed the local 7-eleven just up the road from where I live and noticed a news crew setup out the front. I did not think much of it at the time but found out later that someone took to two people there with an axe, crazy stuff. I reckon they might need to change the sign back to 'The Wild West' from the 'Inner West'. I still remember the old days in Newtown and surrounds, certainly not the latte sipping culture it is now 🙂

Its pretty shit that you turn up to a 7-eleven to grab some late night goodies and get attacked by some nutter, hopefully the two that were attacked do make a recovery and return to some resemblance of a normal life again..

Anyways, here's a whole bunch of images stitched together into a panorama of Sydney Harbour, quite nice after the sun (well what there was of it) had gone down and lights of the city cut through the scene. No axe wielding peeps out there on this night, just the couples armed with cold pizza and wine for a romantic evening on the harbour…or thats what it seemed 🙂

Which leads me to a question for all you light room gurus.. LR is awesome for correcting this stuff, however I would like to apply the defringe (under lens corrections) to only selective parts of the image, to prevent it doing weird stuff to places where purple is meant to be 😉 ideally i want to be able just to selectively apply it to the left side of some buildings for example..
I know you can use a control point, however it only gives you a option for defringe, not the full control ie purple/cyan control…

I pulled another swifty on this one.. I had taken a test shot at super high iso just to check the composition, the B+W filter is screw in so getting the compo right is a bit harder than when using the slide in filter types. In the final exposure of 309 seconds, the two boats in the foreground where a bit on the blurry side from the movement, hence I just layered a small part from the test shot onto the final image, even at high iso it was ok and really only accounted for a tiny part of the frame. That said even at the high iso the noise control is pretty darn good anyways…a little selective noise reduction and its pretty hard to tell 😉

+Clint Burkinshaw just for you mate, i would have not posted it otherwise 😉

The little planet used about 2/3rds of this frame, the process (excluding the wrapping) is fairly similar, well as much as I can remember 🙂 …
The tricky bit is just getting the image level and getting the ends to join up without huge discontinuities (tone/colour and subject)

9 images stitched together in PTGUI (only because Photoshop struggled to blend the sky tones together in a natural way.
Exif love:
D750 coupled with 85mm f1.4 @ 85mm Aperture: f/14 and Shutter Speed: 15s
ISO 100
out front – Lee Graduated 0.9x Filter

I have been on a little self imposed ban on these planetoid images, however a recent pano of the Sydney skyline from Bradleys head has inspired me to do one of these again – in preference to the actual original pano image dare I say it 🙂

9 images stitched together than wrangled into a planet shape

and of course the obligatory gif animation of the Sydney Opera House Vivid festival projections.

I know what I am getting for christmas…. a smoke machine! The artwork of the dome is very cool, however this sculpture attracted kids like cake at a birthday party, they just could not get enough of it! from peering into the dome thru the smoke to running around like crazy chooks in the wafting smoke as it dissipated into the night.

I had promised Chaos I would take her to see some vivid lights this year, but there was no way I was repeating the experience from a few years back taking her into the city, that was mildly epic (and that was just getting in there). Sydney uni however was the perfect venue for little kids, plenty of space, lots of other kids and most importantly, manageable crowds, plenty of accessible food and drink too (albeit at inflated prices ).

Anyway, chaos loved the Mirador dome and made plenty of friends whilst there, tickles on the other had was much more reserved and found running off into the dark much more fun :-/

a rare moment with no one else in the view 🙂

Are tired of vivid shots yet ? well you have another week of it until it all gets wrapped up but I am sure the images will still flow long after that 🙂

The Sydney Opera House is probably the most premium location and canvas for the Vivid festival, its seen by millions (thats just my guess without any real data 🙂 – but considering how many see it just in their daily commute i reckon its gotta be in that realm) so you wanna get it right.

I was not overly enthused by the display this year, very animated and not many wow moments. I did however do a bit of research on these mad projectors (Barco) which project the images / animations onto the sails, pretty cool things, the lens must be something pretty special and the bulbs that sit behind them… wowsers, however I did note that the bulbs have a life of 500 hours which i pretty good i reckon, you could do quite a few vivid sessions on a set of bulbs 😉 although you do have quite a few projectors for just one location :-O

The following images are a selection of some of the better projections imo 🙂 I did love the big bold colours as opposed to the funny animations 😉 Be sure to zoom in, its large res just for that 🙂

I have lived in Sydney for quite some years and have grown very accustom to the harbour and its views, its always nice to see it from a different perspective. Whilst I would like to think this is an original view ( although i have not seen any shots like it) I am sure, someone, somewhere has stood in the same place and fired off a few shots 🙂

If you have time, check out +Peter Eastway 's latest post, he has some great thoughts about the whole thing about photographing popular spots and he always has very nice shots and a great attitude.